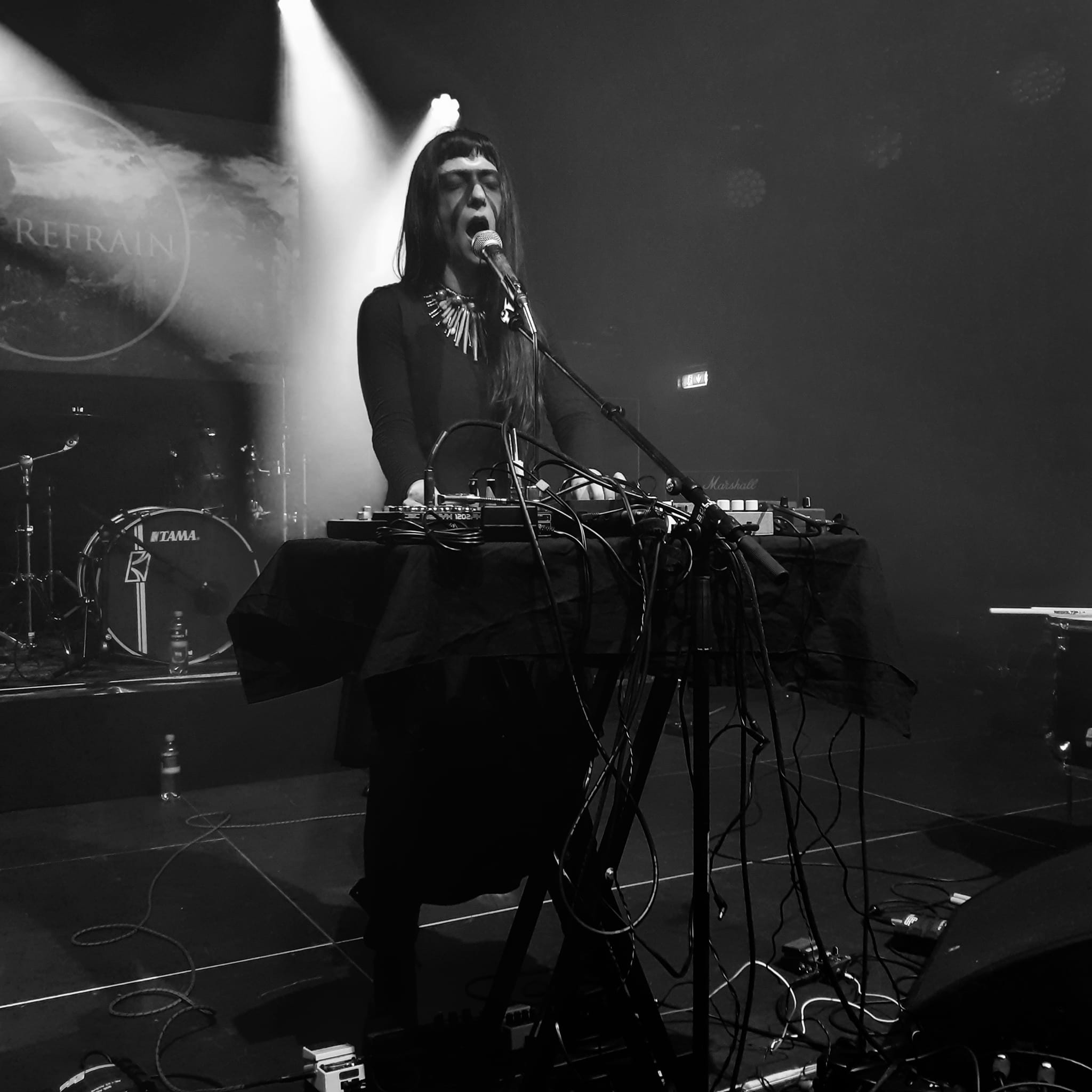 These are some of the labels that might flow through your mind as you will be trying to figure out Lili Refrain. That is, only if – like me – you have this cursed habit on putting labels on everything. If you do, you should obviously drop that one and just embrace the superb human experience unfolding in front of you.

There I was, in those many moments at Roadburn Festival where one has a choice between running their way through the schedule of big stage “must-sees”, or just go with the flow and grab whatever opportunity the current time and location offer. How lucky I was to choose the latter path, for I walked right into one of the best surprises of the day.

Lili Refrain is no newcomer, would I immediately figure out ; for the dense crowd was more than enthusiast to greet this woman coming our through the fumes, solemnly dressed in black and literally seizing the air by her sheer presence.

And then she started playing. And singing. Releasing the air and allowing all of us to breathe again, in communion with her carefully built up, melodic mantras.

Lili Refrain is a one-woman-band, with the particularity that she does not need any session musicians to go live. She uses a sampler to record percussions, guitars, synths and her versatile voice to craft loops. A pretty modern approach to deliver an experience full of mysteries : tribal, solemn drumming, chants and whispers, carrions, Swans-inspired droning guitars and synths, all ascending into pure moments of grace, be it either transcendental chants, or catchy as hell and frankly awesome mid-tempo Heavy Metal riffing.

Lili’s voice is clearly the most important instrument in this album. She whispers and hushes, goes from intense and omenous Sorceress singing to otherworldly lyrical register, even foraying to Tibetan throat singing at times. She sings of life and death, summons ancient spirits and mesmerizes the audience, building and maintaining tension and relief all along.

One could say Lili Refrain plays something between Heilung, Mike Oldfield, Dead Can Dance, Swans and Anna Von Hausswolff (the latter two which she explicitly cites as influences), with operatic singing and a rock’n’roll spirit. While this can hopefully give a catchy hint into her albums for a newcomer audience, this fails to capture how her presence and personality brings all of these sounds in the flesh.

While eminently ritualistic, Lili’s performance has nothing to do with a “guru approach”. The audience is never subordinated under the artist’s presence : it is a communion. She sings for us, looks at us in the eye, she smiles, she responds to the audience signs and hints. She takes people’s hands in hers. During this whole tribal, transcendental experience we had an earnest, heartfelt human being opening up in front of us. Not a religious authority leading us from a mystical distance.

Lili Refrain is mesmerizing and she deserves the biggest stage she can get. Give her the main set and she will single-handedly defeat Heilung into putting thousands of people into a trance. Because she will do it with no need for a lot of tricks and props, no over-the-top scenery ; just her voice, her guts and her heart.

Special thanks to all the photographers who agreed for me to use their beautiful pictures – all credits are there, go check out their works !

MANA is out on streaming platforms and for physical releases. Go ahead and give all her works a listen :